It has been a turbulent few weeks in British politics as the UK inches closer to an exit from the European Union. Some progress has been made but confusion remains with the timing of the departure, and the basis on which it will take place. There is still a lot of uncertainty to what will happen next.

Despite the continuing uncertainty, the position regarding the rights of EU nationals  to continue to live and work in the UK has been clear for some time.

We also have a broad idea of how the immigration landscape may look when a new regime is introduced in January 2021. As a result, organisations are in a position to communicate with their existing EU workforce about what they need to be doing to regularise their status in the UK. In this briefing, we provide a summary of the latest Brexit developments and explore how the immigration position may vary depending on whether the UK leaves with a deal or with no deal.

EU nationals in the UK

However, this will not affect EU nationals who are in the UK before the relevant cut-off date as they will be able to regularise their status by obtaining pre-settled or settled status under the new EU Settlement Scheme.

The key question is what is the ‘relevant cut-off date’?

The answer depends on whether the UK leaves the EU with a deal or with no deal.

There will be a transition period until at least 31 December 2020 during which time EU law relating to free movement of people would continue to apply.

No transition period but the government has confirmed that free movement of people would continue under UK law until the end of 2020.

What about the right to work?

Whilst the immigration position is fairly clear, employers should consider how the right to work position may differ between a deal and a no deal scenario. In both cases, the date on which the employee entered the UK will be critical. The tables below summarises the position (as at 22 October 2019). [2] 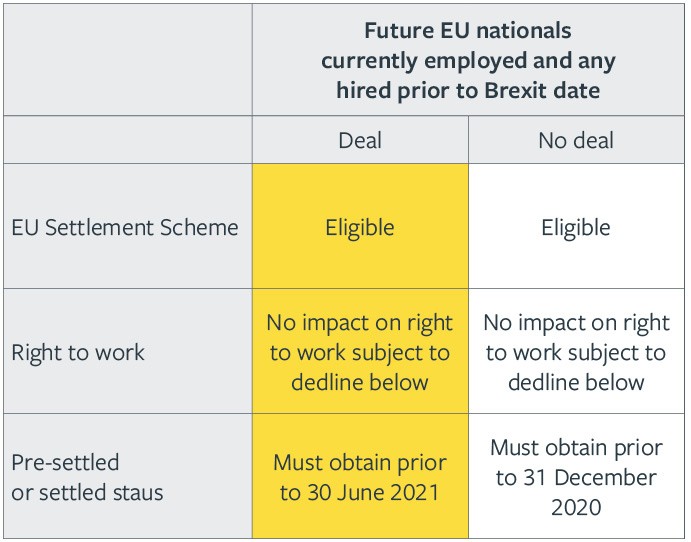 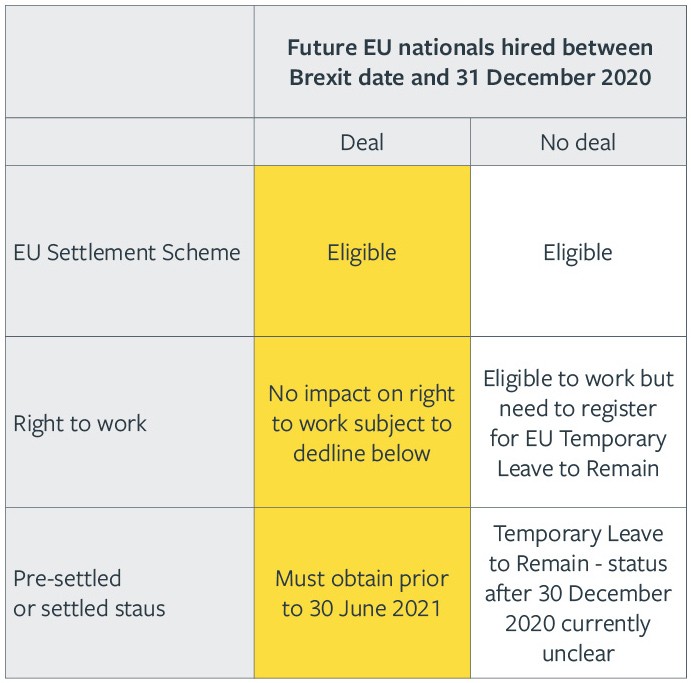 The government has been very clear that it intends to introduce a new immigration regime covering EU nationals [1] from 1 January 2021.  Following an assessment by the Migration Advisory Committee (“MAC”) on the impact of Brexit on the UK labour market, Theresa May’s government endorsed a White Paper. This gave us a reasonable idea of what the new regime may look like. In particular, it was proposed that EU nationals should not be given preferential treatment over non-EU nationals.

Boris Johnson has gone back to the drawing board and asked the MAC to submit fresh proposals for delivering a system which concentrates on welcoming the ‘brightest and best’ talent from around the world and focuses on sectors where there is a shortage of labour. He would like this system to be based on the model used in Australia.

How can you contribute?

We are producing a collective submission on behalf of our clients and contacts to send to the MAC. If you would like to contribute, our short questionnaire below asks for your feedback on the key questions posed by the MAC. Your contribution will remain anonymous but could help define the future of our immigration framework in the UK.

Contribute to the future of UK immigration

[1] References to EU nationals in this note include EEA nationals and third-party family members.  It does not include Irish nationals who will continue to benefit from the Common Travel Area agreement in place between the UK and Ireland.

[2] All dates subject to change particularly if the 31 October 2019 deadline is extended.