Our origins can be traced back to the 19th Century when the commercial law firm of Stephen Gateley & Sons was established in Birmingham.

Four generations of the Gateley family grew the firm from its Victorian beginnings to service the rising industrial and commercial needs of both individuals and their companies in Birmingham and the surrounding region.

The practice of Bernard Wareing was formed in the early part of the twentieth century and was equally committed to helping the mercantile activities of Birmingham prosper in an age when the city was renowned for being ‘the workshop of the world’. These two firms came together in 1974, initially as Gateley Wareing & Co, and grew from just 12 people, to over 200 by the late 1990s.

Today the group employs around 1,000 people across offices in 11 UK cities and one in Dubai.

Recognising an opportunity to adopt a business structure that would support and enhance growth, we were one of the first UK law firms to take advantage of the changes to the law in England and Wales to adopt an Alternative Business Structure (ABS), allowing non-lawyers to own and invest in law firms. On 8 June 2015, Gateley listed on the London Stock Exchange’s growth market, AIM, a move that has enabled us to create a solid platform for continued growth.

The success of this move has since led to many other UK law firms going public, creating a UK asset class that did not exist before 2015.

In the last 30 years we have grown consistently with an unbroken record of increased profit delivery year on year. This has been achieved through an expansion of business services and a focus on a business mix that offers sustainable growth through a variety of macroeconomic conditions.

The key to our success

Our culture is inclusive, it empowers people and builds trust and we have fun along the way. All of which helps drive performance. Our people are straight-talking, collaborative and they are ambitious for success. We had first-mover advantage following our IPO and have attracted many new people to the business since then based on our reputation as a stand out place to work, our forward thinking, modern business model and the ability to offer a rewarding career path that plays to people's strengths and ambitions. 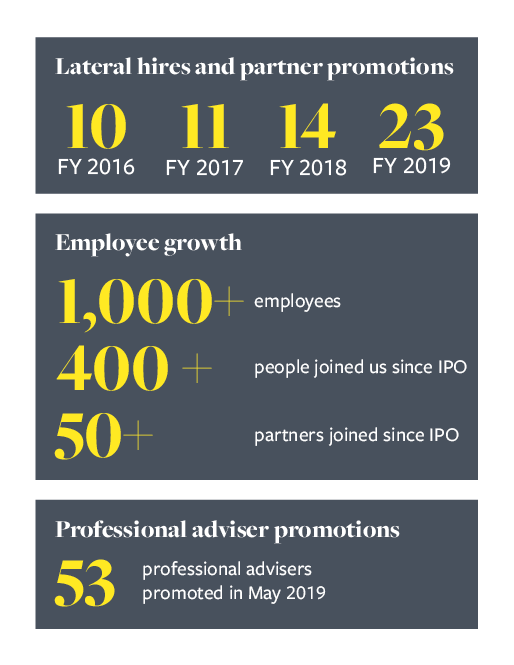 The latest facts and figures from the group

Get the latest updates straight to your inbox

See a snapshot of our financial results, a word from our CEO and an update on the four acquisitions made throughout the year.